It’s early days (we’ve got plans…) but Peepus now has an image search for kids on his site. It’s designed for use by younger children, using content sourced from a number of places in a way that means the images should be suitable for young
children. At the moment you need to enter words for the search but we’re developing ways that children who can’t write (or talk!) yet can also find pictures they want.There are other features in the pipeline too. 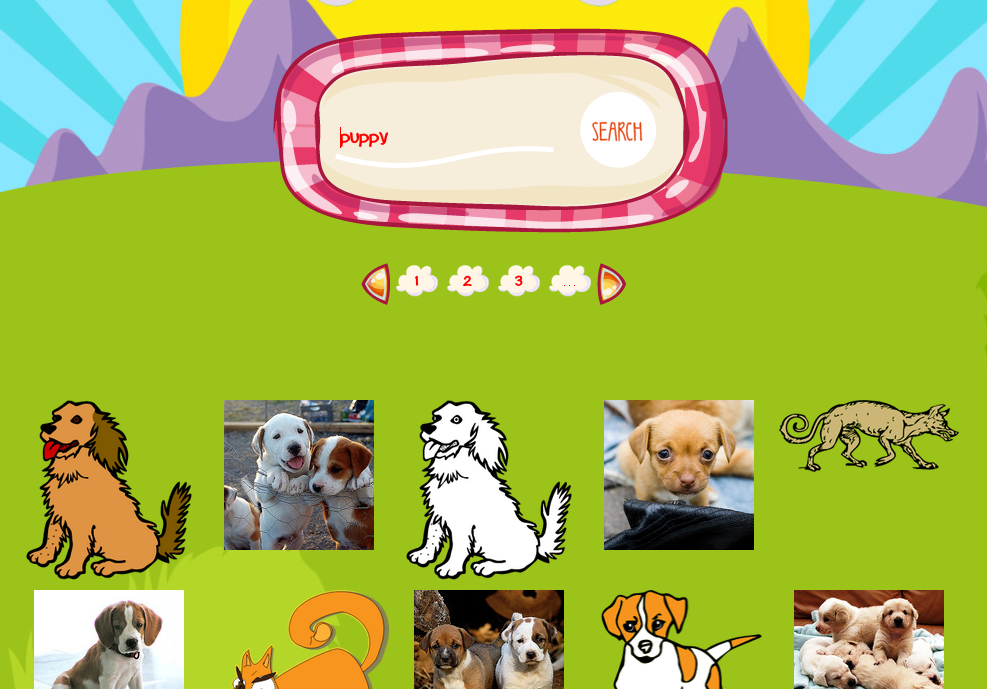 The search results can include both photos and cartoons, including ones suitable for colouring in and can be shared with other children. Some more information on the image search can be found here.

We’d love to get your feedback on it, whether via comments, tweets to Peepus or email.

With pilot schools going live we’ve been busy; but in a good way. In
particular it has meant we’ve added loads of educational content to our
lists – and some of these sites are so good we’ll be blogging about some
of them over the coming weeks and months. If you know a school or
nursery that would be interested in piloting TwoTen we’d love to hear
from them. Get them to drop Peepus a tweet.

We’re proud to be able to announce we’ve made the finals of Vator Splash London!
We’ll be pitching to a panel of judges on Thursday the 7th of November,
along with the other finalists. We also get a stand to demo TwoTen to
everyone who attends, so if you want to see TwoTen in action, or see the
prototype Cube, come along on the day.

It’s been a long and challenging process, but the prototype Cube, the
box that looks after your children while they browse the Internet, is
now in our possession. Designed physically to withstand the rigours of
life around younger children and to be simple to use by parents and
children alike, the Cube will be simply the best way to bring up
children in the Internet age.

No vents for liquids (or solids!) to find their way inside, no sockets
from which plugs can be pulled or pens inserted, no corners or edges,
and constructed in soft materials to minimise risk of harm to both
itself and those who may come into contact with it. The Cube provides a
transparent layer of protection and guidance for children browsing the
web, regardless of what they are using to browse, whether tablet, TV or
laptop. Safe whichever way you want to look at it

Moshi Monsters, that is. Or to be more specific, the
Moshi Monsters site has been rated U in its entirety for availability
through TwoTen’s service.

While TwoTen generally rates the content on sites, rather than the site
as a whole, an approach that allows us to have some YouTube videos
available but not others, sites that are dynamic and with lots of
content only available behind a login can’t be easily assessed in that
way. Many of these sorts of sites of course would not be suitable for
kids – and wouldn’t claim to be. It’s easy for us to deal with those
sites, they don’t need to be rated for inclusion on TwoTen.

But Moshi Monsters most certainly is intended for kids (of all ages!)
but is secured and has many social aspects. To rate Moshi Monsters and
sites like it requires us to take the site through an audit, where we
assess the safeguards in place rather than the content as such. We’re
very pleased to be able to say that Moshi Monsters passed the audit with
flying colours on all aspects of their site. They achieved this through
a mixture of technology-based solutions, human moderators and effective
processes, creating a very safe environment while still allowing
in-game chat, forums and blogs for all their members.

Now Peepus can go on Moshi Monsters whenever he gets a spare moment and
get to know all the monsters. Maybe this means the future could bring a
sequel to the Moshi Monsters movie. "Peepus and the Monsters!

On the 20th of July nine amazingly brave people jumped out of a plane to raise money for the Lullaby Trust
in memory of a beautiful little girl who died at just nine months old
from Sudden Infant Death Syndrome (SIDS), also known as cot death.

Matilda Mae was exactly nine months old. Perfectly healthy and having
learned to crawl that day, there was absolutely nothing to suggest she
wouldn’t wake up after being put down to sleep in her cot that night.
SIDS is cruel, can happen at any time and to any family and that is why
eight women and one man (last minute stand-in due to illness!), one
person for each month of Matilda’s all too brief but beautiful life,
jumped out of a plane that day.

Of course anyone who read about or saw pictures of beautiful baby Tilda
couldn’t fail to be moved by what happened to her and that is why TwoTen
wanted to try to help in some way. Guided by Hayley
who organised the event, we covered the cost of the hotel for the
evening before the skydive and even popped down on the morning of the
jump to provide a little something pink and bubbly for when everyone had
their feet firmly back on solid ground.

Here’s what Hayley had to say:

"A few months ago I had a crazy idea to skydive in Matilda Mae’s memory
and eventually 8 other women joined me. We were coming from all over the
country and wanted to unite the night before to get to know one
another. We arranged a hotel and thanks to the lovely TwoTen we didn’t
have to worry about costs. It was a great evening and we all slept
fairly soundly whilst waking frequently with nerves. The day was simply
amazing and words can’t describe how emotional it was and that unique
feeling of floating on free fall. We decided there and then the Matilda
Mae skydive is going to be an annual event"

Keep your eye on our blog for
blog round up of posts from the skydivers themselves and, of course
don’t forget you can still donate to the Lullaby Trust via the team’s Just Giving page

June was a busy month for the parent bloggers, with both Cybher and Britmums taking place. TwoTen sponsored attendees at both.

On Saturday the 1st of June bloggers descended upon London for Cybher,
the first all inclusive female blogger event in the UK. With sessions
entitled Ditch the Fugly, Bloggers Vs Brands – Owning your Influence,
Sh*t you don’t know, Going Viral – how to make your post go BOOM! and
The Art of Plus Size it was bound to be an amazing day.

TwoTen provided sponsorship to Playful Learners, an excellent childhood
activity blog written by childminder Adele, to attend the event. She had
a great time catching up with fellow bloggers, showing off her gorgeous
new baby boy and attending the sessions which she hopes will help her
improve not only her blog but her family business too! Find out what
Adele has to say about her time at Cybher on her blog.

TwoTen also sponsored a someone to attend another great blogging event
this year. BritMums Live took place in London over 2 days this summer
and Carolin from Mummy Alarm
had an amazing time meeting up with fellow bloggers and friends,
attending sessions on photography, You Tube, travel blogging and much
more. BritMums Live turned out to be a very emotional experience for
most who attended with inspiring key note speeches and lots of tears
shed during the Brilliance in Blogging Awards too!

See what Carolin thought of BritMums Live on her blog.

TwoTen  had someone review the TwoTen service
completely independently – by which we mean nobody was in the room to
point out features, there were no reviewers notes provided, nothing. In a
way it was a test of the simplicity of our design approach.

We sent Alan Mackenzie (of e-safety adviser
and a member of the UK Council for Child Internet Safety) just
instructions on how to enable the TwoTen public demo service in his web
browser of choice and then waited, slightly nervously, to see what he
would say. We’ll all have to wait for his full review to be published, which will be in his school e-safety newsletter, but he sent us some
feedback to keep us going:

"I have managed to take a quick initial browse. I set up the proxy and used Chrome on Mac OSX."

"The concept is great, I can see this working really well. Tested out
lots of subjects via Google search such as self harming, adult,
pro-anorexia and more and had no issues at all."

"I think this could be a brilliant service to children, to parents and to schools."

We think he liked it!

Our CEO Chris Puttick was invited to represent TwoTen on a panel for the Internet Service Providers Association
latest Policy Forum,
which was on the subject of Online Child Protection.
This subject has been one of the key internet policy debates in recent
years. The Bailey Review, a campaign to make
parental controls more readily available and a
Government consultation have tried to set goal posts for the Internet
industry.
However, at times, there seems to be a disconnect
between the different parties involved in the debate, with a lack of
consensus over what good online child protection
should look like.

TwoTen were there to say

Of course, TwoTen ensures the Internet for younger
children is safer than ever before as well!
A constructive debate was had and most there agreed
that making internet better was as or more important than just safer.

We’re extremely excited to be able to announce TwoTen have been shortlisted for an award by the Internet Service Providers Association
in the Internet Safety and Security category. Competition is pretty
tough. It’s almost certainly the first time an ISPA (any?) award
shortlist has pitted a duck against a pig…